We are the world

There is a time when we should heed a certain call

Cause the world it seems it's right in this line

Cause there's a chance for taking in needing our own lives

It seems we need nothing at all

I used to feel that I should give away my heart

And it shows that fear of needing them

Then I read the headlines and it said they're dying there

And it shows that we must heed instead

We are the world

We are the children

Knowing that Mozambique was struck by Natural Disaster

On 17th March, Mr.Yue send one message to our company group chat in Wechat, saying "everyone, Beira was struck by hurricane in the evening of 15th,please be assured that our staff, trailers and logistic facilities are all safe and sound.Colleagues of executive department, please make preparations accordingly, as we are going to go to Beria."

Everyone prayed for Mozambique after seeing this information. Our management team booked the plane tickets to Mozambique right away, and staff of human resources department started to work immediately to fully support Mozambique.

On 31st March, our colleagues located in Africa send back some pictures about our company's aiding for Mozambique and received the following comments from our management team:

Mr. Yue: we should develop our company as a backbone to provide a happy life for African people and try our best to contribute to public welfare.

Mr.Lv: our booming development comes from our love for Africa and African people. They would need our selfless and instinct love from the bottom of our hearts, especially when they are confronted with difficulties and challenges. Our actions and love would build us to be more excellent person with pure heart and glorious life. Please take your actions to cherish and repay with gratitude about the opportunities Africa offers to us.

Please keep the unity of knowledge and practice, the cooperation between you and me and the integration of human and nature. 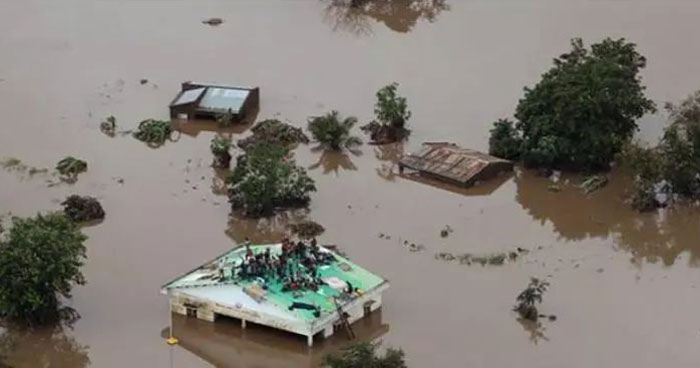 People of Mozambique trapped by flood caused by hurricane

Information of Disaster in Mozambique

On 15th April, received the notification from operation team of our Wechat official account to write original creation for this disaster relief in Mozambique.

From 16th to 19th April, collected detailed and relative information to fully understand Mozambique and impact of this hurricane had to Mozambique.

Wechat official accounts that focusing on domestic and African news have all reported the disaster happened in Mozambique. According to the Minister of Ministry of Land, Environment and Rural Development in Mozambique, the disaster had caused 417 deaths and 15,000 people waiting to be rescued. Official statistic shows that more than 23,000 houses and 500 classrooms have been destroyed. 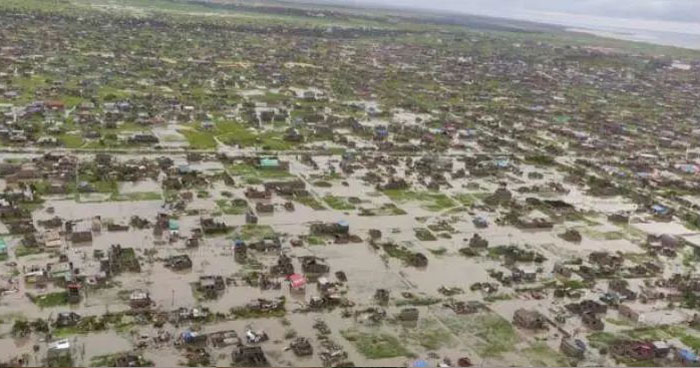 Homes surrounded by flood in Mozambique

We are Taking Action

1. Who have participated in this aid action?

There are our vice president Zhang Hewei and principals of all business sectors including Cen Liang, Liu Wandian, Liu Weiliang and Wang Song. They arrived at the disaster stricken area right after hurricane gone and tried their best to support the aid. And during the charitable actions, they all offered assistance to carry materials and vehicle repair and maintenance services.

2. From the picture send back from live aid,  we can see there are many people from Compassion Relief Tzu Chi Foundation, is this an joint aid action we worked together with Tzu Chi?

Yes, we have had a close cooperation with Tzu Chi this time. They supported with large batches of relief suppliers and due to unfamiliar with Mozambique, they contacted Mr. Zhang of our company, who provided TIM warehouses and some houses as their biggest storage site in Beira. We also offered drivers, vehicle maintenance personnel, diesel oil and vehicles like pickups, heavy trucks and trailers to be at Tzu Chi's disposal. Other than that, we helped them to solve the accommodation and food for them to focus on aid action.

4. In 1985, the Live air had raised a large amount of fund for Ethiopia. But when the fist batch of food supply arrived at Ethiopia, people found that the poor railway condition, insufficient highway resources and lack of vehicles stopped the food from delivered to hit areas. Compared with the situation that food wasted on the terminals near the Red Sea in 1985, will the development of logistics and fundamental construction in 2019 support the aid?

I think so. Since compared with the bad road and warehouse conditions before, everything has improved greatly to makes it easier for aid action. 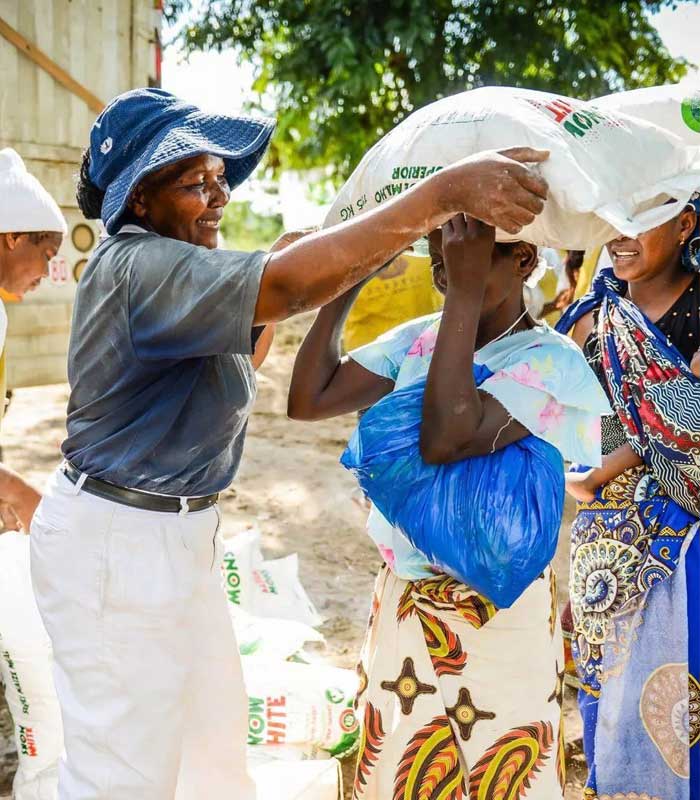 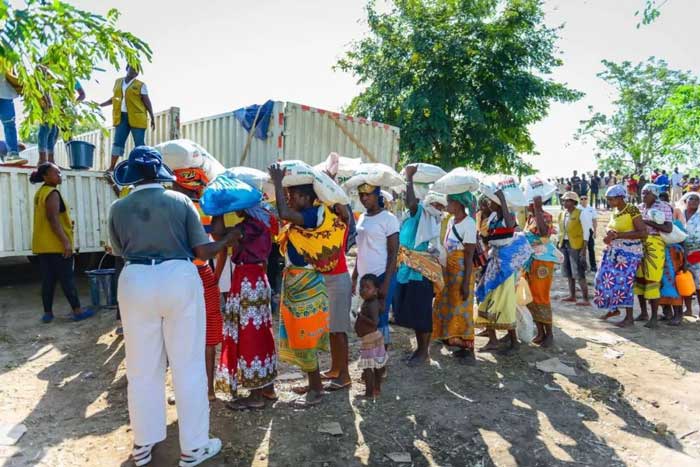 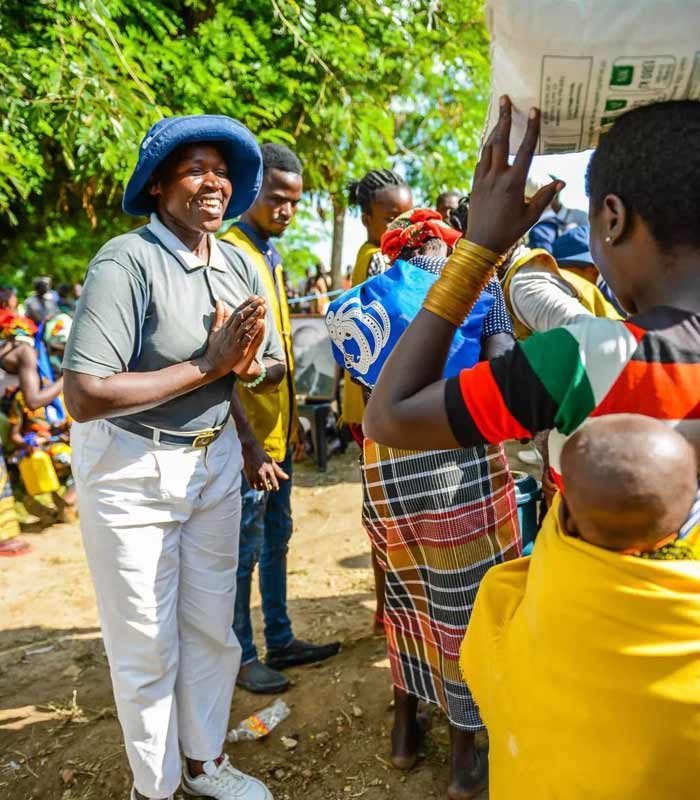 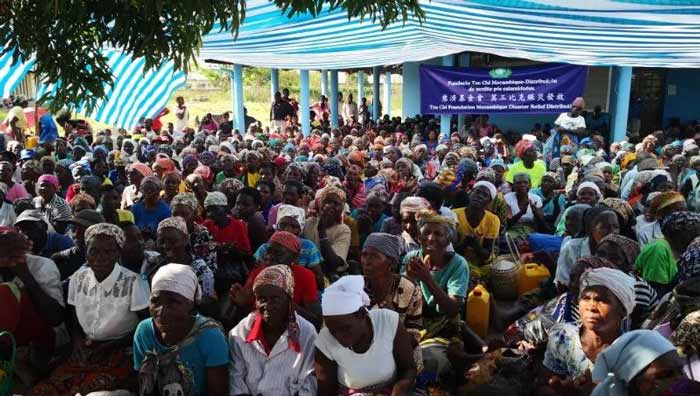 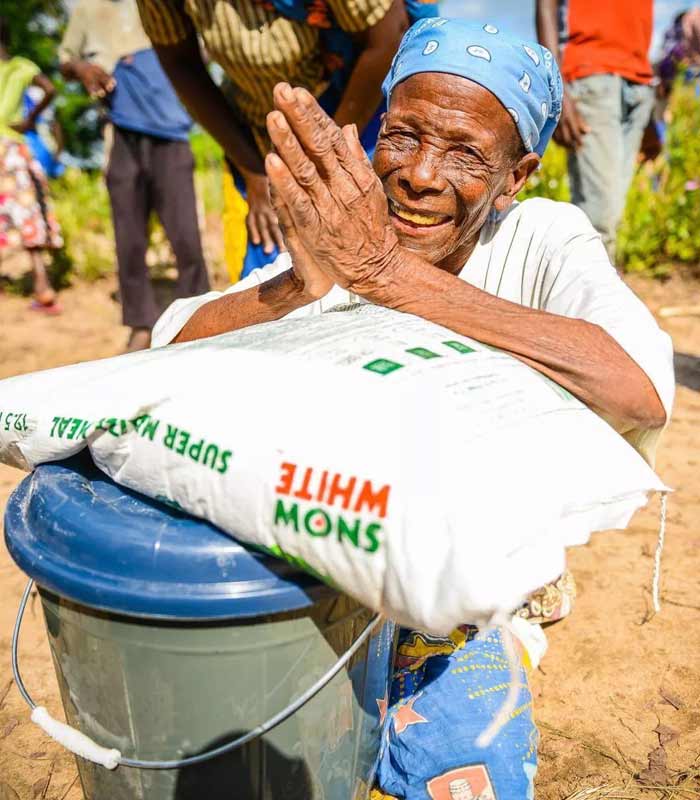 Aid for the stricken 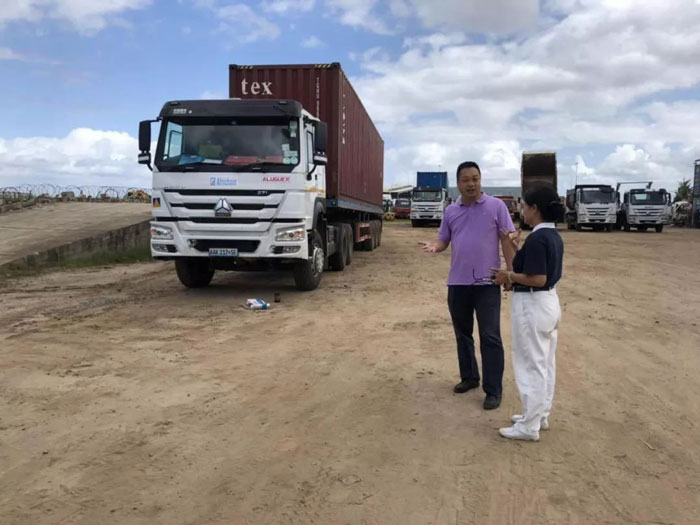 4. How do you feel about this misfortune happened in Mozambique?

This rare disaster has crushed the poor Mozambique and the flood caused by continuous rain left by hurricane has made the condition worse. People in Mozambique have suffered a lot and I feel truly sorry for them. On the other hand, Mozambique is not capable of rescuing people all by themselves and cannot initiate such a large scale of aid plan within a very short time. Then the malaria and cholera spread have caused more death. Pollution in drinking water and delayed control of diseases lead to the massive spread of malaria and cholera. Situations in the countryside are even worse. Because of the high temperature, Mr. Zhang also suffered malaria and summer cold when helping with relief supplies and vehicles dispatching. We all need to protect ourselves when rescuing others. And I feel quite comforting to see that the life of Mozambique people is getting back to normal. 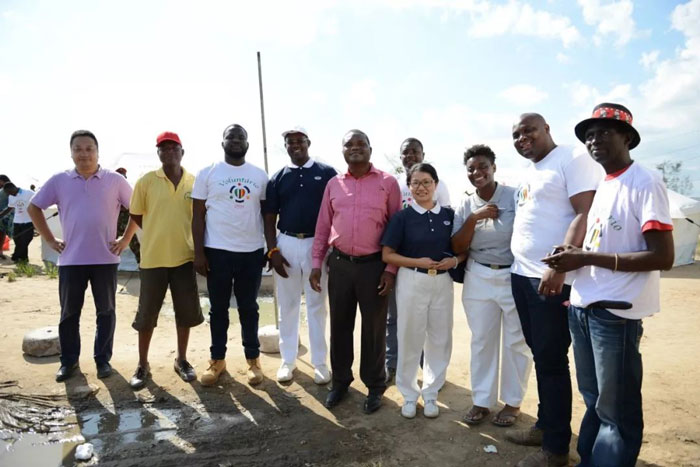 5. How's the situation going for the area destroyed by disaster after e period of  rebuild?

Currently Mozambique is gradually recovering to the normal status with citizens going back to rebuild their homes and started to work again. People living in serious stricken areas are still helping themselves to get out of the poor situation. Tzu Chi have issued food, seeds and tools for construction for these people to begin the self-rescue while waiting for other supports.

At the same time, we are organizing people back in China for donation and follow-up services. We've bought 3000 bread in Mozambique for people living in stricken area while arranging one truck for rescue material transportation. 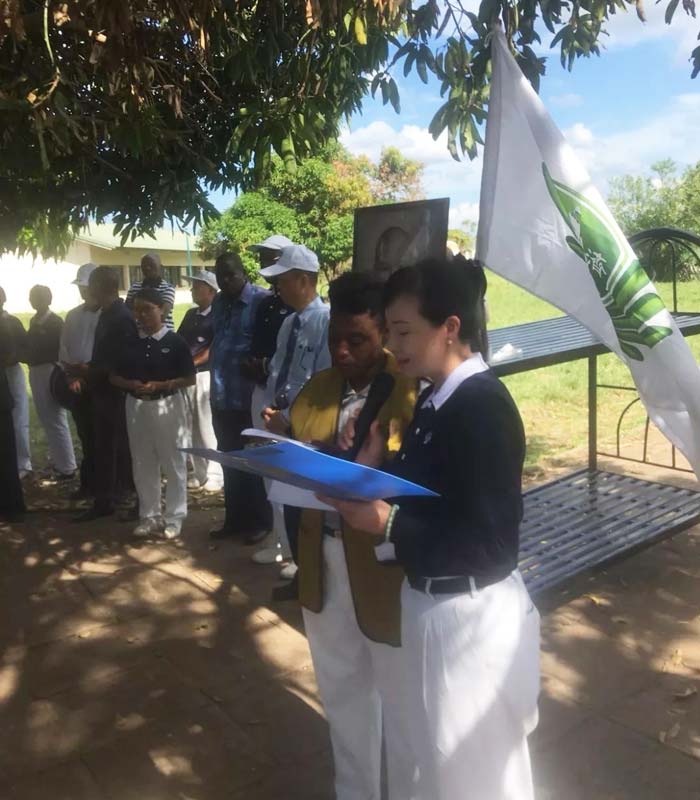 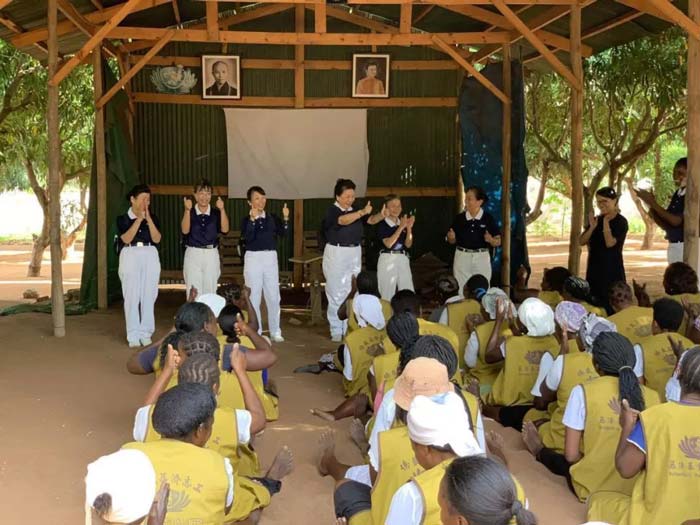 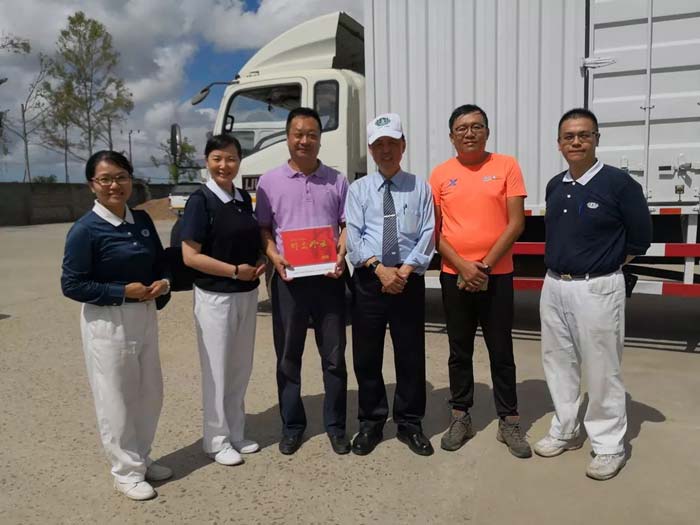 Aid at the frontier of hit area 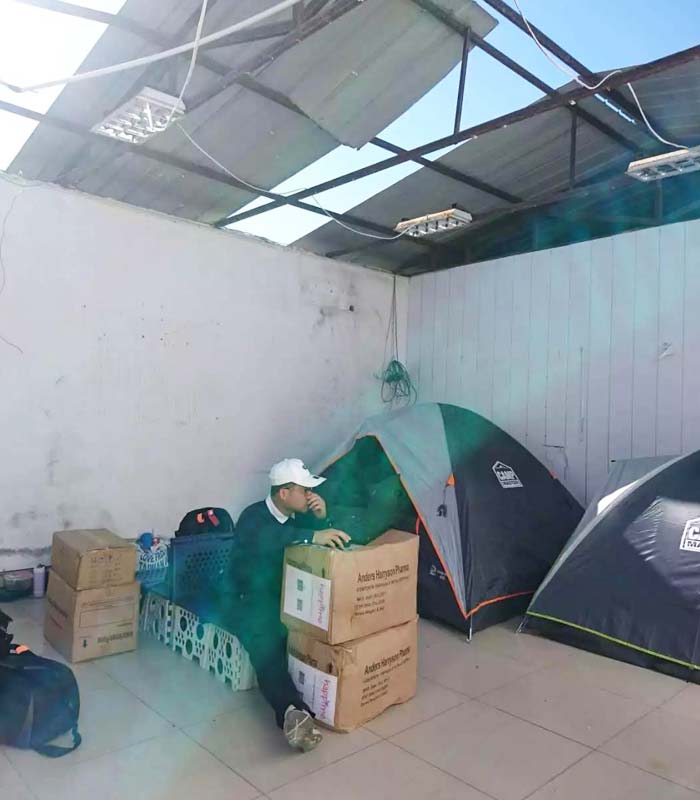 In 1985, China missed the Live aid, the world renowned activity with the gathering of the most famous stars to aid a remote country called Ethiopia.

And for all these following years, China has been assisting Africa to build  railways, highways, generating stations, industry parks and other projects. As one the countries who have presented the greatest aid strength, China is fulfilling the spirit of Live aid with its own actions.

On 19th April, human resources department organized a donation activity called "Love in Africa". As the Bohemian Rhapsody stated in Live aid donation, "you can participate in this Live aid no matter you're rich or poor". And today we are doing the same thing, that is to help another remote country named Mozambique.

No matter we are an enterprise as a whole or as an individual as people, an increasing number of us are making efforts to improve the education, medical treatment, hygienism and economic construction in Africa. The Live aid and love generated by the glorious human nature will always cast the light onto this wondrous vast land.

This article is a tribute to everyone from our company and Tzu Chi who has been a part of this aid action, as all of you have the most beautiful heart.